Duncan Hutt and John Bradley visited this mill, subject of a planning application for conversion to a house, in 2004 to assess what remained and what could be gleaned about its past.

William Strother had the tithe of Canno Mill in 1653 and by 1716 it had become the property of his son Robert.  The mill passed to the Orde family and was sold to George Morton of West Newton in 1776.

Armstong’s county map of 1769 marks “Canny Mill” and it is also shown on both Fryer’s 1820 and Greenwood’s 1828 maps.  The mill is also shown as a corn mill on the First Edition Ordnance Survey map in the 1860s.  Directory entries list William Mable, James Dodd and William Turnbull Barber as millers in 1827, 1855 & 1887 respectively.

The three storey stone built mill building has a slate roof with a former kiln building with later ‘coalhouses’ added to its side.  The building shows signs of at least two stages in development.  The earlier mill was probably a low one storey building with loft space and an external waterwheel.  A later development added a wheelhouse and its continuation upwards as well as the other two floors.  The kiln may also have been added at this time and, though entirely speculative, it is possible that a former kiln could have been separate from the mill. 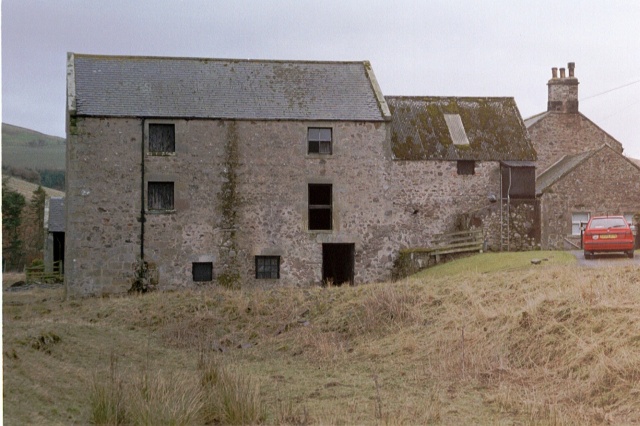 The wheelpit is visible though partially infilled with rubble and silt.  The tail and headraces immediately adjacent to the mill have been deliberately filled in.  Ashlar stonework lines the headrace wall within the building and ashlar blockwork has been placed behind a wheel to approximately trace its shape.  The bare minimum of this stonework has been used with the remainder being rough stone.  The outside edge of the wheelpit has fallen away, perhaps with the stone being removed for other purposes since the wheel went out of use.  There are no wheel scratch marks but the centre of a filled in axle hole exists as well as a guide channel for a sluice.  The maximum size for the wheel would have been 16 ft diameter and 4ft wide, almost certainly undershot.

Internally the mill is virtually devoid of traces of its milling past, the task of machinery removal has been thoroughly done and predates the replacement of floors which themselves are showing the signs of age and damage by woodworm in places.  The wall between the former wheel and internal machinery shows the most traces of mill use.  In it is a central curved alcove shaped to take the great-spur wheel and two smaller recesses on either side of this, framed with wood.  These two recesses would have held the wall ends of the bridge trees supporting the millstones.  The layout would have been suitable for the mill to have had two pairs of stones driven from the great-spur wheel but it is possible that a third pair was situated at the front, all trace of which has now gone.  At the opposite end of the ground floor is the opening to a former kiln, now bricked up, and a small fireplace in one corner – too close to the door to have taken a roasting kiln. 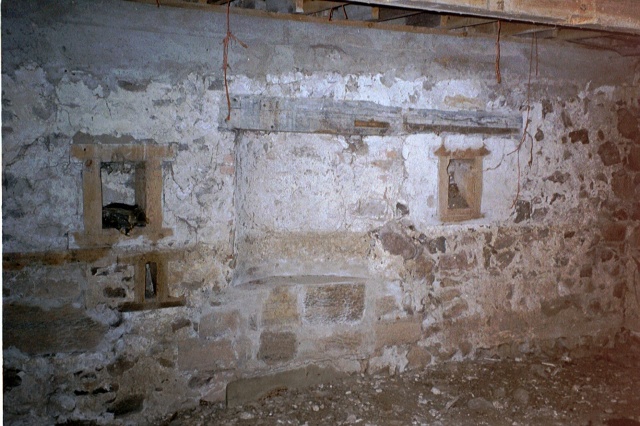 The first floor is even more barren in terms of machinery.  The top bearing to the main shaft can be seen on one of the main beams while a second bearing occurs in the wall, probably to have taken a lineshaft from a crown gear.  The floor has been replaced and thus no sign of stone locations or chutes remain though the sack hoist trap door seems to have been replaced in situ.  The second floor is equally empty, again the sack hoist trap door remains and a rough timber in the roof space suggests it may have been used as part of a rough hoist.  One hopper remains but is relatively modern.  There is a door from the second floor through to the roof space of the kiln, this is lined with sheet metal on the kiln side.  There is little trace of even the sack hoist mechanism in the roof space.

The kiln has been converted to house a garage, the present concrete floor is higher than the original floor level with signs of openings at present floor level from both the ground floor of the mill and from the back of the later added coalhouses.  The former kiln floor level can be seen though there seems little sign of an opening from the main mill.  It is probable that the fire hole and hearth was brick built as many of the old openings are filled in using bricks of a greater age than the work itself.  The top door from the mill comes out at a level where it appears that there might have been another floor.  Whether this was a second ‘malting’ floor or served another purpose is not clear.

There are a few items of legible graffiti around the mill but it is not clear as to whether any of it is contemporary with the mill.  “J.B. Lyall” occurs on the second floor while “John Dodds” is written a number of times on the first floor.  Also on this floor are some notes about wool dated between 1955 and 1969 as well as some information on barley:

According to local information the mill was used as a barley store in more recent times, which probably explains both this piece of graffiti as well as the new floors still containing trap doors with the rudimentary hoist mechanism.